‘Our faith inspires us to welcome the stranger’

“Vino” Pajanor, executive director of Catholic Charities, said the organization has been working around the clock to humanely receive thousands of immigrants and refugees, under the leadership of Bishop Robert McElroy.

The organization has led the effort along the California-Mexico border to receive immigrants — primarily impoverished women and children — seeking asylum in the United States. Its staff helps these migrants, legally in the country, to reach their final destination elsewhere.

The staff also has scrambled to welcome refugees from Afghanistan, after the collapse of their government.

State social service officials — impressed with the quality, agility and approach of this service —have expanded their contracts with the organization. Most recently they selected it to oversee the resettlement of Afghan refugees across all of Southern California.

The U.S. Conference of Catholic Bishops advocates for Congress to pass immigration reform. Bishop McElroy powerfully delivers that message across the San Diego region and beyond.

In June 28, 2021, he joined an interfaith prayer vigil in front of the U.S. federal courthouse in downtown San Diego being held to urge people of faith to press their members of Congress to reform the immigration system.

He said that, many times, Congress had appeared ready to act to offer a pathway to legalize at least some of the 11 million undocumented migrants, only to fail to do so at the last minute.

“We can’t stand by anymore and watch our political processes — broken as they are — destroy the dreams and the hopes of the refugees and the immigrants who have not only come here and lived here but have helped build our nation and make it better,” he said in his remarks.

He urged all people of faith to act.

“We have to stand up and we have to demand action, to greet the stranger who comes to our border, especially those who are refugees and seeking asylum,” he said. “And also, for those who have been part of our society for a decade, two decades or three decades, and say to them, ‘You are one of us’ and mean it.”

He noted that the experience of fleeing injustice and repression and having to move to another place is “at the very center” of the Christian, Jewish or Muslim faith.

“We stand in vigil with those in Washington who are putting themselves on the line … to change our broken immigration system, to truly welcome the refugees. Let us stand with them, let us unite with them across the whole of this nation. And let us do so as people of faith, because that is what our faith calls us to do.”

Catholic Charities rises to the challenge

Thousands of families have made their way to the U.S.-Mexico border to apply to the U.S. for asylum. Fleeing violence, war, poverty and persecution, they arrive with nothing more than a profound hope for a better life. 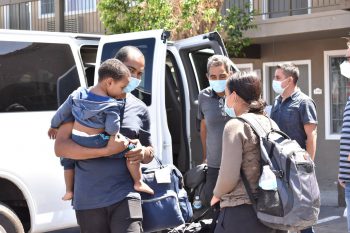 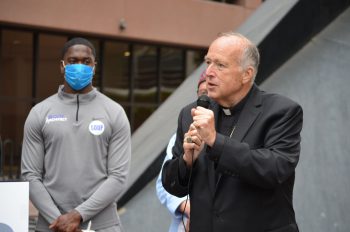